I had started to write this last week, and then Les Miles had to go and write an open love letter to Baton Rouge in the Huffington Post (our house loves you, Les!). Well, I have quite a few things to add about what there is to love about Baton Rouge.

I, too, had my ‘anniversary’ for moving to Baton Rouge this summer. Eight years ago, my husband completed his medical residency and took a job at a hospital here. He is a born and raised Baton Rouge boy, and this was his home. I, on the other hand, had grown up in a military family, and never had a town I could call home.

Moving to Baton Rouge is what some transplants and I like to call ‘tricky’ and ‘hard to navigate’. A lot of us joke there should be a self help group for transplants to understand the ins and outs. Most people end up coming back to Baton Rouge, even if they leave for their education. So, when you meet people from here, and they ask you ‘where did you go to school?’, they don’t mean college. They mean high school. They take that shit seriously around here.

Even though it took me about a year to acclimate to Baton Rouge, I fell in love with this town and made a list of what I think makes my home so special. In no particular order, they are:

Food:​ I had a pretty severe eating disorder growing up. This does not bode well for someone who moves to a town where everything revolves around food. Hell, our seasons revolve around food. People talk about pumpkin season and Starbucks; here it’s crawfish season, sno-ball season, and gumbo season. You can’t celebrate, mourn, visit, tailgate, have a party, meeting or coffee without food–the people here see no point. Even impromptu visits, any person living here will be able to feed you if you show up at their house unannounced, and they will love every minute of it. Also, crawfish boils are something I think everyone needs to experience. Only here, the most expensive party you will throw all year consists of food you can catch out of a creek, with the decorations on the table being newspaper, a paper towel roll and a Parkay squeeze bottle…..and they are amazing.

Family/Community: I had a small family before I married into a large family. I felt lucky that my brother lived here and that we would raise our children with both sides of relatives in the same town. Then, it became very apparent that family here is not just blood relation. EVERYONE is your family, and anyone and everyone will go out of their way to help you. I continue to be amazed at how our community can pull together to fight for a common cause and to help one another. If you’ve met me, you know I can talk to a brick wall and will make fast friends with anyone. I met my soulmates when I moved here because everyone is friendly to everyone, making trips to the grocery store and checking out with a store clerk a fun interaction. You learn about their families, their problems, their proud moments, and feel special that you get to be a small part of their experiences. The other thing that I thing Baton Rouge exemplifies is that money does not buy happiness. The movie industry films a lot here, and you’ll see movie stars shopping and eating at all the same places us mere mortals do. The great is that no one cares what they do and that they’re celebrities. We care about each other as humans, and that matters more to us than money and status. The people here choose to make the best of their situation and it is contagious and has taught me a lot about what kind of person I want to be.

Hurricanes: Yep. Hurricanes. Not because of the destruction they can cause, but because you really never know people until you’ve been through a hurricane together. Once you know whether or not you are going to need to evacuate, you start to make preparations. Here’s the odd thing that only people that live here will understand: no one cares about hoarding water, they only care about how much beer they have to get through the power outages. In this situation, alcohol matters. A lot. Then, everyone waits out the storm together. You don’t talk about how big your house is in the matter of four bedrooms, you say ‘we can sleep twenty people here, bring everyone you know.’ That includes perfect strangers, by the way. Some pretty awful things can come from nature, but it can also bring out the beauty in people and their ability to make the best out of a situation. I remember my mother calling several years ago during a hurricane because she was concerned that when she called to check on my brother, he told her, ‘don’t worry, we’re having a hurricane party.’

Hugs & Emotions: I’ve never been a big hugger. It kind of wigs me out that people get all up in my personal space and are so joyful about it. When I started working in my early twenties, my co-workers were huggers. I could feel my body tense up every time someone went to hug me. Hugs, like food, are for everything; if you see someone for the first time in a long time, or for the first time in a day. You hug to celebrate, mourn, or to say goodbye. I’m going to be frank: I thought it was absolutely the oddest thing I had ever encountered. Then, I moved to Baton Rouge. If you’re new to town, get ready to hug, because it’s coming. Make sure you are wearing deodorant, you don’t want to gross people out.

I went to a luncheon recently, and I realized once I left and got in the car that I had hugged probably twenty people during the course of the hour. And I initiated most of them. Oh. My. God. These people have brought me over to the dark side.

The same went for crying and showing emotion. I hate to cry and I definitely will make it a point to never cry in public. Yep, that is until I went to Junior League meeting last week (love my smart, enthusiastic ladies!) and I was so moved by our guest speaker, I couldn’t stop sobbing. I was also sitting in front of the room, which made it all the better. And guess what? Everyone hugged me.

Religion: I’m not talking about Jesus, people. I’m talking about LSU football. Although, I think most people here would believe that Jesus makes LSU football the best, my husband included. So, in case you are not familiar with the insanity, also known as LSU football, let me tell you how absolutely bat-shit crazy and awesome it is. When I first married my husband, I seriously contemplated making my husband go to his parents during the football season. He was so wrapped up in football, I questioned if he might be mentally ill or just a bad case of obsessive-compulsive disorder (no, really). Then, we moved to Baton Rouge, and I made the mistake of going out to run errands on a game day without purple and gold on (I’ll never do that again), and I realized the whole damn town is as bad, if not worse than my husband about football. I don’t want to leave my house or be around my husband if the team loses because everyone is just so sad and downtrodden. On the other hand, if LSU wins, the whole town is basically high for the week.

Let’s also talk about the rituals. Lucky socks? Oh, no. It’s lucky socks, underwear, what your kids wear, what your wife wears, what you eat, what your co-workers eat and what time you eat. My husband somehow brainwashed our kids into believing that Raising Cane’s is the only game day food. Even if he’s not at home, the kids panic and know that Cane’s is the food they have to consume at some point during the day. We went to Houston last weekend for the season opener, and I found myself calling my parents to make sure they fed them Cane’s before game started. I also had them pick up what we call ‘touch down skittles’. The boys know that when the team makes a goal, they get ‘touch down skittles’. Yeah, I might be just as crazy as he is.

Then, there’s the Bengal Belles. One of the women I love most in this town is heavily involved with the Bengal Belles, a mostly female organization that supports the academic programs for the student athletes for LSU. So, assuming you’ve never been to one of their events, I’m going to tell you about what I thought the first time I went: these. B*tches. are. insane. Imagine 700 of your closest female friends dressed in the gaudiest purple, gold and tiger printed clothing, screaming and cheering over lunch. The first one I was at, my husband was texting me the whole time because he was jealous the guest speakers were NFL/former LSU players who were childhood heroes of his. When he asked me what I thought about it, I told him I was going to have to ‘process the experience’ and talk about it the next day. I had never in my life seen something so crazy, other than Saturday night in the football stadium. I took a friend with me after I told her the same thing. She made fun of me for saying I needed to ‘process it’, and then she understood. She, too, had to process the experience. Well, we did, and now we’re both proud Bengal Belle members. I even dragged my husband to his first luncheon to experience being a ‘Bengal Beau’. Now, months before football season, I start shopping for purple and gold clothes and accessories so that I am prepared to get in the spirit. Dare I say it, the women I thought might be clinically insane were contagious and I really enjoy and look forward to the experience.

And now it’s home: Like I had said before, I lived in several different towns before moving to Baton Rouge and never felt like I had a hometown. We went to visit my parents last fall and as we were leaving, I looked at my husband and said, ‘take me home’….. Baton Rouge welcomed me with open arms….. thank you, Baton Rouge, for loving me and my family. I love you, too. 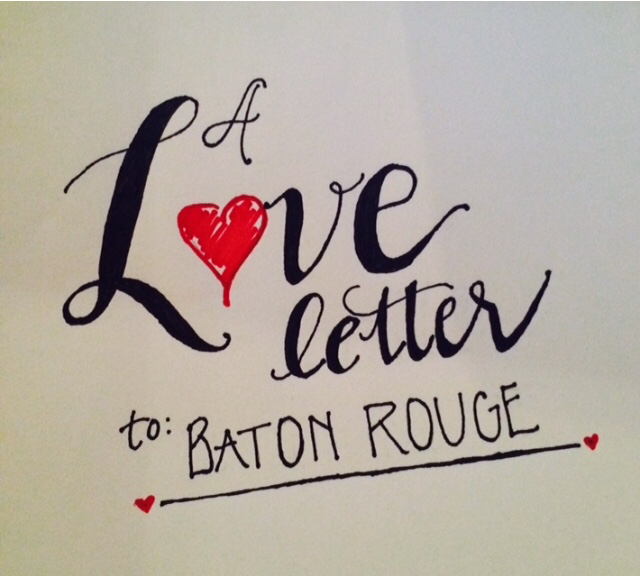