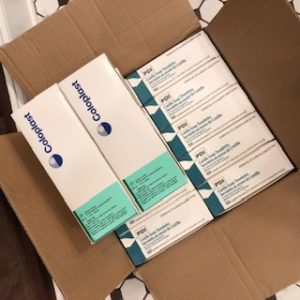 The words ‘only one victim’ rolled around in my brain while I tossed and turned in my bed last night.

Twenty-five year old bus driver Shane Piche pled guilty to raping a fourteen year old girl in June 2018. Last Thursday, he was sentenced to probation by New York Supreme Court Judge, Judge James P. McClusky. He also has to register as a Level 1 sex offender, someone who is described as someone with a low risk to reoffend.

And now for the most infuriating part, according to the Daily Times, “Judge McClusky said because Piche had no prior arrests and there was only one victim in this plea, Level 1 was more appropriate.”

Those words were still rolling around in my head this morning while I was unpacking my delivery of catheters that show up on my doorstep every month — you know, the ones that show up because I have scar tissue from when someone touched me where they weren’t supposed to. It occurred to me, while looking down at this box on my bathroom floor and thinking about this fourteen year old survivor, that while I’ve talked and written about the emotional toll that rape and abuse takes on a person, I’ve never discussed the financial portion of what it takes for this one victim (me) to live the life I want.

So today I’m going to throw numbers at you. Not the typical statistics, and not my normal writing, but money.

Here are the line items in our monthly household budget that only exist because I survived childhood sexual abuse and rape:

Two lab appointments to run my urine to see if I have an infection: $160.00

One primary care physician appointment if I do have an infection: $180.00

One Urologist appointment where my bladder output is measured: $210.00

Prescriptions to manage the damage caused from the abuse (out of pocket): $700.00

This isn’t always the cost, of course. Sometimes it’s more, sometimes it’s less. So far in 2019, it’s been less because I haven’t had to see the urologist for three months (Thank the Lord for that!) and I’ve only had to go to the lab four times. When the anniversary of the rape is near, I up my therapist visits to once a week. Two years ago, I was visiting the lab weekly, seeing my primary care physician weekly, the urologist monthly, and having nuclear tests performed on my kidneys quarterly due to an infection that would just not go away. Like I said, sometimes it’s more, sometimes it’s less, but there are always expenses.

This also doesn’t take in to account the tens of thousands of dollars my parents spent on specialists when I was younger, trying to get me well, both emotionally and physically.

The financial aspect of the aftermath of abuse is something that often gets overlooked. There’s a ton of other economic implications that abuse and violence have, but those studies are for another day. In my life, not only do I, the survivor, deal with the trauma of what happened emotionally, I deal with it physically and financially. I’m not the only victim here, because my fantastic husband, children, parents, brother and other loved ones are also victims because they are part of the collateral damage. We all agree the money is well spent — my life is of my choosing and it is fantastic in every sense. But it’s amazing because I chose to put the work into it with the support of my parents and husband and some of that work takes money.

So, no, there is not just one victim here. Saying that there is minimizes the effects sexual trauma has on survivors and the people in their lives.