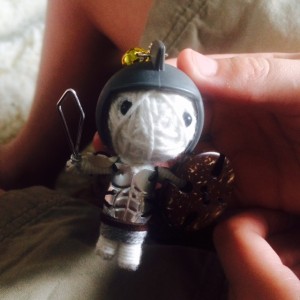 Last week, I wrote about irony after my first Scary Mommy post.  Well, life likes to put the smackdown on you when you don’t listen to the signs the universe is clearly shoving in your face.

This Monday, as in four days ago, was worse than last Monday.  When I picked up the boys from camp and tried to drive home, I had to pull over twice because Theodore was so hysterical.  Two hours later, he had finally calmed down and was playing quietly upstairs when I heard him starting to pick on Radcliffe.

Don’t get me wrong, those two can fight.  They’re boys, after all, and the definition of opposites. That said, they love each other and are each other’s biggest cheerleaders, but they were squabbling over petty shit.

I could hear them arguing from downstairs and frankly, was almost too tired to intervene.  Parenting is emotionally exhausting.

So, I called him downstairs, and asked him what was really going on.  He started to blame Radcliffe, and I shut it down.  ‘No,’ I said, ‘what are you really upset about?’

He just started to cry.

Him:  ‘It’s just never going to get easier.’

Him: ‘Being around people.  I don’t know how to make friends.  And I’m just different than the other kids, I know I am, and I hate it. And the kids are not nice to me.’

These are the days I hate parenting.  I want to scoop them up into my cocoon and never let them experience pain.

He and I talk a lot about finding our ‘people’, and that when you are an odd bird (like myself), sometimes that doesn’t come until later, but that doesn’t mean you need to conform to the people around you to compromise and find them.

So, we made daily goals for camp.  Each day, he would introduce himself to one kid, and ask two questions.  Sounds easy, but for him, it’s not.  And, no matter what, he would be kind, even when the others are not.

Then, I gave him this ‘Watchover Voodoo’ doll I bought him in the airport while traveling this past weekend.  The tag says, ‘I will help give you strength to fight for all the things you believe in.’  I told him to put it in his pocket and grab it when he needs the reminder that I’m there, helping him fight little and big fights.

Me:  ‘I know why the universe gave you to me.  So I can help you do whatever you want to do, whatever your big dreams are, and help you find your people.’

Him: ‘I live here, mom.  And I know that you might not think you’re the best mom, but in my eyes, you will always be the best mom.’

So, today is Friday, and I was driving the boys back to camp.  On the way, I asked what he bought with the $10 I had sent with him to buy snacks at the dairy store at the LSU Agriculture Center, one of their field trips.  He told me he bought ice cream, and a bottle of water.  Teasingly, I asked him where my change was.

Then Radcliffe said, ‘You didn’t tell her?’

Theodore: ‘Only one kid’s parents’ forgot to send money for a snack.  So I bought his for him.  I didn’t want him to feel left out. It was the right thing to do.’

Fighting tears, I dropped them off and then I pulled over and cried, for reasons I couldn’t pinpoint.  Why was I crying???

Because this little human is choosing to be a better person, even when he has been given every reason in the world to be bitter after people are mean and exclusionary.  I’m ending this week exhausted and worn the fuck out, and for that solitary moment, it was worth it.

3 thoughts on “Another Life Lesson via Irony”