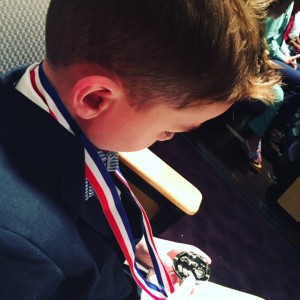 Sometimes the pendulum swings so hard in our household, I get emotional whiplash over the course of a week.

Both of our boys are on the spectrum, but their issues are wildly different. Theodore had significantly delayed speech but Radcliffe talked early, but their IQ’s are roughly equivalent, meaning that while they couldn’t be further apart on the spectrum, they are landing in a very similar spot. What works for one won’t work for the other, yet what won’t work for the general population, will work for both of them.

We work hard in this house to focus on the magic, on their gifts that they alone have. But we have highs and lows, just like everyone else.

Radcliffe struggled with reading comprehension and has had to have intervention in school. While driving home from tutoring last year, he choked up and said, ‘I’m just not smart like my brother.’

I pulled over and sternly told him that wasn’t true and explained how everyone has special gifts. That seemed to suffice that day, but it has always lingered in the back of my thoughts. Until then, our biggest problem with both of the boys were their social skills, and I worried about adding one more damn thing to this poor child’s plate.

Radcliffe’s magical gift is that he’s basically lunacy at work. He is creative with no confines or structure to hold him back— a dream most artists would covet.

Last week, we went to the Young Author’s award ceremony for the region. We knew he placed in the region for poetry, but they don’t tell you if you’re first, second, or third. All first place winners automatically go on to the state competition.

We made a big deal about, and told Radcliffe we would take him to dinner before for whatever kind of food he wanted. He wanted to try ribs for the first time. Um, okay? 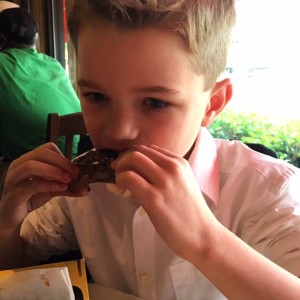 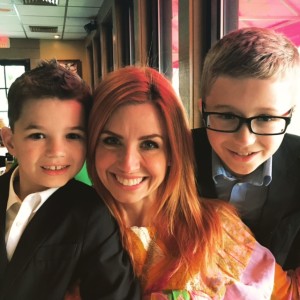 When we got to the ceremony, they announced he was first place in poetry for the second grade — which meant he went on to state. And then they announced that he placed second in the state for poetry — the only kid in the region, kindergarten through twelfth to place in poetry. I was screaming like a maniac, jumping up and down. I almost felt sorry for the other people in the audience.

That high lasted all week. We’re making progress, I thought.

He got off the bus crying and by the time he walked into the house, it was a full blown meltdown. I was able to get him to calm down and I took him to tutoring. On the way home, I had promised the boys fast food for dinner tonight, and I started driving that way, the opposite way of our normal route home.

During this drive, I started a phone conversation. It was wrapping up, and I pulled into the fast food parking lot and put the car in park. I started to hear dry heaving from the back seat and sobbing in between heaves.

The phone call lasted 3 minutes from the time I parked to the time I hung up.

He was dry heaving and sobbing because I stopped the car.

I had a flashback of my daily drives home from preschool with Theodore and how he would vomit all over the backseat if I took a different way home.

And then I had a flashback of the pediatrician giving me the best advice I’ve received since being a mom:

‘Make him as uncomfortable as you can stand it. It will exhaust you, but it will push him and desensitize him. It will be harder for you than it is for you.’

My job as their mother is not to make them comfortable, but to make them uncomfortable — to stretch them to their limits, so they know their limitations are only what they themselves set. It’s working, but dear God, is it so damn hard.

I refused to move the car until he got ahold of himself, which meant we sat in that parking space for a good fifteen minutes. My stubborn streak serves me well in these situations. He finally pulled it together, but didn’t speak to me for another hour.

When he finally came around, we had a pleasant bedtime. Exhausted, I came downstairs to start my nightly chores. While cleaning up, I found an extra copy of his poem on his desk. It was the reminder that I needed that this exhaustion is so very worth it.

Happy is flying in the air on Maw-me’s tire swing.
Happy is the song I sing.
Happy is time at Laser Tag
Or watching a movie that isn’t sad.
Happy is spending time with my nice little dog, Ruby.
Happy is fun and eating yummy eggs.