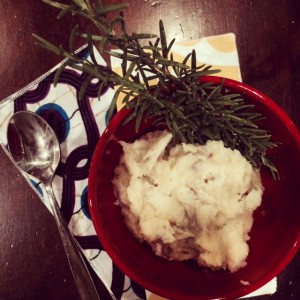 I’ve had a horrible week, which calls for comfort food, specifically mashed potatoes.  The problem is that I am severely allergic to butter and milk, which puts a huge kink in my cooking style.  So, tonight, I decided to try, and it looks like I nailed it on the first try.  Here’s the recipe:

salt and pepper to taste

Clean the potatoes and put them into a small pot.  Fill the pot with water, just enough to cover the potatoes and boil them for approximately 30 minutes, or until you can easily stab them with a fork.

Turn off the stove, drain the potatoes, and then put the butter sticks into the pot.  Set the pot back on the stove and then pour the potatoes over the butter sticks, causing them to start melting.  Drizzle both packets of Flavor Boost over the potatoes.  Side note: if you haven’t tried these flavor boost packets, you are missing out.  They are so easy to add to just about anything you are cooking, adding flavor without over saturating.

Smash the potatoes until nearly flat, then whip them for approximately one minute.  Add salt, pepper, and rosemary to your taste.