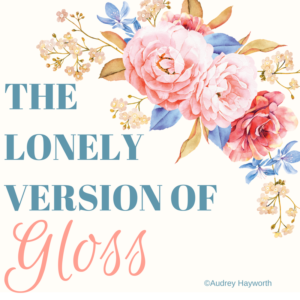 For a long time, specifically this last year, friends of mine and I have had conversations that center around the same question:

Why do we not talk about the hard parts?

If you follow any of my writing, you have obviously read about trying times in my life. What always seems to blow my mind, though, is that both readers, acquaintances, and friends alike believe that I just woke up one day, stepped out of a closet where I left all of the bad memories behind and into a glossy version of a white picket fence life. It is as if most people believe that becoming a well-adjusted person happens overnight and that there is no room to discuss the hard parts. This lonely, glossy version of my life is something I don’t recognize, because it’s not at all the truth.

And so, today, I’m going to tell you about my hard parts. The parts that I don’t talk about because, well, to be frank, they are a part of my life and I have accepted it. That doesn’t mean it’s okay, or that it’s not frustrating or hard. Because it can be, and it is okay to acknowledge that.

This part of my story has several different parts to it, but this ‘hard part’ starts four Mondays ago. I have to see a urologist every three months because my bladder does not work like a normal person’s bladder does. I have scar tissue from being sexually abused, which traps bacteria, which in turn causes frequent urinary tract infections. I also had a severe case of anorexia during my formative years, which weakens the bladder. Both of these issues set my bladder up for failure when I had a hysterectomy many years ago.

When I had my hysterectomy, I had to start using catheters to empty my bladder. I also had to start taking medication to make my bladder work. I had to spend a full day every three months at the doctor’s office where they checked my bladder and my kidneys through every invasive test possible.

For almost eight years, I have checked into this urologist’s office. I wait, as someone in their thirties amongst a waiting room of octogenarians, while they look suspiciously at me, wondering why I am there. I get called by the nurse, and the same routine happens every time. Every time, every three months, for the last eight years.

I go into a special bathroom. I wash my hands and I sit down on a fake toilet that is connected by wires to a contraption on the counter next to it. I start to urinate and when I stop, the machine prints out a graph of the flow rate of my urine output (spoiler alert: it’s terrible). I then go into the exam room where I lay down on the exam table and pull my pants down so the nurse can scan my bladder for retained urine. I lay there why the nurse tries to cover her shock over how much is still leftover because my bladder cannot empty itself. When the doctor comes in, sometimes she sends me over to the imaging center to ultrasound my kidneys and then to nuclear imaging where I watch my kidneys on a large screen overhead drip in tiny dots that look like constellations.

Every time, every three months, for the last eight years. I realized this Monday, four Mondays ago, that not once have I cried about how much it sucks, and I make jokes about it, because, really, what else am I supposed to do to get through it?

Four Mondays ago, the routine started again. I walked into the bathroom and urinated into the fake toilet, watched the graph grind out informing me of my bladder’s failure and then I went across the hall into the exam room. When I walked into the exam room, I stopped and my chest started to tighten. On the counter was a setup for the nurse to catheterize me and I started to panic. In all of these years, with the exception of childbirth, no one else had catheterized me, but me.

I started to cry. These big crocodile tears of frustration, shame and anger fell down my cheeks the entire time. This poor nurse, she couldn’t understand why I was crying. When I apologized to the doctor for basically coming unhinged and a sobbing, blubbering maniac, she hugged me and told me I needed to cry, that these were tears of grief.

And that’s when I realized for all of these years, I have never once cried about this. And I’m not sure why I haven’t cried, because the situation, although surrounded by the best medical professionals, is invasive. When does the invasiveness stop? Never. It never stops. Why do I have to continue to be invaded when the people who did this to me don’t have medical professionals poking tubes into their genitals multiple times a year?

That was four Mondays ago. The next Sunday I started running a high fever and I couldn’t stand up. The next day, three Mondays ago, I went to my general practitioner’s office because I thought I had appendicitis. Turns out, I had pyelonephritis, a bad kidney infection, probably taken root from a urinary tract infection that lasted on and off last year for ten months.

To be clear here: I got this infection because thirty years ago, someone touched something that they shouldn’t have.

For the first ten days, I didn’t leave our bed as I ingested two heavy duty antibiotics. Other people had to help me with the boys, and once, when I was home alone with the boys and unable to get out of the bed by myself, our oldest son had to help me walk to the bathroom, a mere twenty feet away.

After the first two antibiotics didn’t completely get rid of the infection, I began going in for daily shots of antibiotics, the third antibiotic. And then, last Friday, I started a fourth antibiotic to try to get of this nasty thing once and for all. Before this week is over, I will spend another 5-6 hours in a doctor’s office as I am scanned and invaded and then prescribed a long term low dose antibiotic based on the current bacteria counts.

When I was twenty years old, I forgave my abusers and all of those complicit in what happened to me. I did this for me, and me alone. It was as though a physical bag of bricks was removed off of my shoulders. Since then, I have accepted what happened, and through forgiving, I was able to leave my anger behind.

And then last week, I realized I was angry. Not in a hot-tempered sort of way, but in a bitter, nasty, invasive anger that dampens every minute of your day. I felt heavy. I was at church last Wednesday, and I choked out to the priest that I was struggling with forgiving again.

I’m angry that I just lost three weeks of my life to an infection caused indirectly by other people. I’m angry that even though I haven’t been touched by them for twenty years, that I am the one that has to live with the consequences. I’m angry that I continue to go through invasive procedures because someone put their hands where they did not belong.

This is where I’m starting to talk about the hard parts. I’m so sick of everyone thinking that once you get through the hard parts, and you’re never allowed to have a bad day, or struggle with what has happened to you. Because let me tell you, there are parts of it that I could do without. Even on days that I’m doing great, I have to stick a tube into my urethra because an evil person sexually abused me and caused scar tissue. I pay roughly $100 per month so that I can have the supplies to urinate like a normal human. I routinely take antibiotics because I have chronic UTI’s because of what these people did to me.

I am the definition of you never know what battle someone is fighting. I know I look like I have a white picket fence life. And truth be told, I absolutely love my life. But when I have the few hard days, like last week, I hold back because I know that other women will judge me and talk about me just for having the courage to say out loud that I am struggling. I said this part to Harmony (my writing partner and partner in crime) last week, when I was lamenting how frustrated I was that I couldn’t just be angry for once about what happened, for fear of what would be said about me. The two of us have this thing where we play out worst case scenarios. In this case, it was playing out what could be said about me, which morphed into us listing all of the things that, within the last year, have been said about me and in turn shared with me.

Within the last year, I have been told that these things have been said about me: That I’m a raging alcoholic….That I’m just a dumb trophy wife…..That I’m messed up by what happened to me….That I have psychological problems from what happened.…That I almost lost my mind….That I’m uptight…..That I take myself too seriously…..That I don’t take myself seriously enough….That I’m just an aged Barbie doll, flitting around thinking that I’m actually smart.

All of these things have been said about me, and not a single one of them is true.

What I’m trying to say is that people are going to say what they want to about you, regardless of what the truth actually is. The worst has already been said about me, and I wasn’t even vulnerable about the truth. And, as Brene Brown would say— these people haven’t been face down in the arena with me so their opinion does not count.

Recently, Harmony realized she is an alcoholic, and because she is authentic, she is not hiding her road to sobriety. But I’ve also watched women tear her down because she has acknowledged she has a problem and that there are hard days. People are talking about her like they talk about me. Over the last few weeks, as I watched her go through obvious physical withdrawals and taking her to AA, I’ve wondered why women put others in a neat box of assumptions and labels, tied neatly up with a bow.
So is the question:

Why do so many people put each other in a box to make themselves feel better?

Why do so many people put each other in a box? To make themselves feel better.

I think it is the latter. But I am not backing down in acknowledging the hard parts. We absolutely need to talk about the hard parts. This is how we get better, evolve, form more authentic connections and live the life of our choosing.

Harmony and I had a Facebook live over the weekend talking about this, about how we are both embracing these difficult conversations for both ourselves, for other women, and the women who will come after us. You can watch that here.

It’s time to get comfortable with being uncomfortable. Buckle up. The conversations are coming.