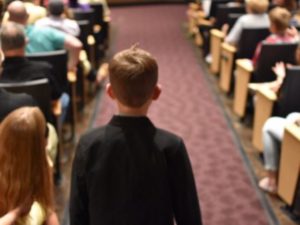 A few months ago, Radcliffe came to me with tears in his eyes.

Radcliffe: I don’t want to tell you. I need you to take me to the doctor because something’s wrong with me.

After some coaxing, he said this:

Radcliffe: I hear voices and I know it’s weird and I’m embarrassed and people are going to judge me.

I internally start to panic, but I remained calm.

Me:  Are the voices telling you to do things?

Radcliffe: (looking at me quizzically) What? No! These people live in my mind like a movie and they have adventures and fight bad people. But they keep having adventures, even when I try to ignore it.

He inherited my brain, I realized. I hugged him and told him I needed to show him something. I brought him into my office and pointed to a piece of white butcher paper taped to the wall with black sharpie notes written on it.

Me: These are the people that live in my brain that I can’t turn off. This is the book I’ve been working on.

I could see the lightbulb go off and a wave of relief wash over him. This child, who with Asperger’s sees the world in black and white but is the most creative child, does not understand his own creativity. It must be so confusing, to be nine years old and not understand that this is how a creative mind works when you generally see things in stark contrast.

We’ve talked a lot since then about stories, how they’re made, keeping a notebook of thoughts, storyboards, and how to turn thoughts into a story. Since then, he’s come up with two comprehensive storylines that, dare I say, exceeds anything I could ever imagine.

Tuesday night, he seemed nervous. When I asked him what was wrong, he told me he was nervous he wouldn’t place in state like he did last year.

Jesus. He has imposter syndrome already and he’s only nine.

After lots of hugs and encouragement, we went to the ceremony where they announced he also placed first in the state for poetry. The look on his face when they announced it brought tears to my eyes.

He sat down and said, ‘Wow, this is really exciting.’

It really is. It really, really is. It seemed fitting that this happened the beginning of Autism Awareness Month. We all worry about our children, and autism mothers worry about their children finding a place in this world. While I will always have this worry, I love seeing our children find a spot where they feel good about themselves and seeing them light up when they are in that place. Every day is Autism Day in our house, not just the month of April. But these days? I’ll take every single one of them.

Leaf Piles
Leaves falling like rain in a pile.
There are so many they make me smile.
A wind will make my pile gone in awhile.
But that’s okay, it’s just my style.