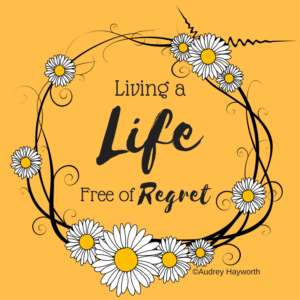 Have you ever been completely honest with yourself about regret? As in, have you ever indexed all of the things you wish you didn’t say or didn’t do?

What about the things you didn’t say when you had the chance?

I had a notoriously tough childhood. Sexual abuse fed an eating disorder, and then I was raped. I was an angry person, and gratitude seemed to be something for the favored people, the ones with the perfect lives. In retrospect, as a forgiving adult, I understand the why behind this sentiment.

Years of therapy helped me target turning points in my life that helped to steer me in a healthier direction. One such turning point was my Aunt Josephine, a woman I only met once and yet that is the singular defining moment in my childhood that made me question the difference between “good” and “evil” people.

During a particularly dark time in my childhood, I attended a rare family event. While there, Aunt Josephine smiled down at me, with light from the windows shining behind her, casting the shadow of an angel, and gifted me with an enameled daisy chain bracelet, with no expectation of anything in return.

I held onto that bracelet and then regrettably lost it in years later in one of my many moves. I became obsessed with finding the bracelet and searched vintage stores, then eBay and Etsy, to no avail. I was obsessed because I wanted to tell her thank you. Thank you for showing me that not all adults are evil and that people are inherently good and want to give with no ulterior intent.

Years went by, 30 years, actually, and the bracelet crossed my mind every few months. I need to write her and tell her thank you, I would think in a fleeting moment, but I never did.

Then, I was driving one day when I got the phone call that she had died. I had to pull over because I was overcome with regret. Why the hell did I let 30 years pass without telling someone I was grateful for their influence in my life? It’s something she likely had no recollection of, but that five-minute interaction made me question everything.

This is what regret looks like: a gnawing feeling that you need to fix something that won’t go away. I couldn’t fix that I never properly thanked Aunt Josephine, but I could start to make an intentional effort to thank the people in my life that make a difference, big and small.

Around the same time that I started writing the thank you notes, my parents were able to track down an identical version of the daisy chain bracelet I had so desperately been searching for.

Last November, I had a stack of about 10 cards. I don’t remember who all was in that stack, but I remember one in particular was addressed to a close acquaintance of mine whose advice and opinions had been influential in certain decisions I had made the previous year. We briefly had a conversation about the card the next time we spoke, and the reason I send them out. He told me it made him make a more conscious effort to thank people in his life.

Four months later, I spoke to him on a Friday afternoon. At the end of the conversation, I asked him how everything was going in his personal life, since the conversation up until that point was professional. He said, “You know, for the first time in a really long time, I can say that I’m really good and really grateful. I’m happy at work, the wife is good, and the kids are happy. And they all know I am thankful for them.”

The next day, he was in a car accident and died later in the week from his injuries.

I really struggled, and still struggle, with the reasoning of the universe. Why does bad stuff happen?

Later that week, for probably the 10th time, I was discussing this with my husband. He finally stopped me. “He was happy, he knew he was loved, and I think he probably died without regret.”

He was right. And I didn’t wait until this Thanksgiving to write thank you notes. I started writing them furiously shortly after that conversation. I won’t miss out on another opportunity to tell someone thank you for being a positive light in my life. As much as this exercise helps me to be mindful and keep me grounded in gratitude, what if that person needs to hear what you have to say? That what you do and say actually matters, no matter how tiny the gesture? And that, in turn, through your gesture of gratitude, helps them?

I implore you to put your gratitude out into your world. Days of gratitude on social media is a start, but personal thank-yous and direct expressions of gratitude are what will keep the regret for words left unsaid away.

This was originally published on Scary Mommy, ©2015.